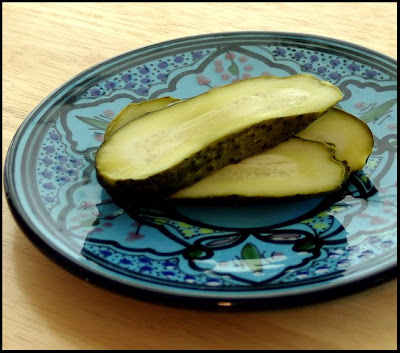 Jim Lahey has a recipe for homemade pickles in his book, My Bread. I've never tried to do any pickling before, but when I saw Kirby cucumbers at the grocery store I thought I'd give it a try.

I used Jim's basic recipe for the brine--red wine vinegar with water and salt, but I switched up the seasonings a bit. I used garlic cloves, red pepper flakes, mustard seeds, and dill seeds. I'll give you Jim's recipe, but also, here's a link that shows step by step how to make pickles.

By the way, the pickles were fabulous! Still crisp, but full of flavor and not overly sour or sweet like most store-bought versions.

Combine the water, vinegar, coriander, garlic, and salt in a large bowl, stirring until the salt is dissolved.

Wash the cucumbers well and remove any blemishes with a paring knife. Pack the cucumbers into four sterilized Ball jars. Cover the cucumbers with brine and seal tightly. Refrigerate and let cure for 2 weeks, turning the jars occasionally.

Always use clean tongs to retrieve the pickles (not your hands). To test if they are ready, cut one open; it should have a translucency all the way through and that typical pickle crispness and flavor. The pickles will keep in the refrigerator for a month--make sure they are submerged in the brine.