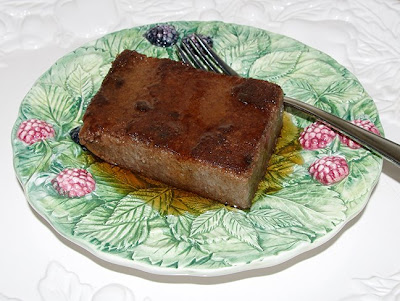 Dave has told me at least 1000 times that when he was growing up his favorite breakfast was Cream of Wheat cereal. I don't think I'd even tasted Cream of Wheat until I was an adult and I made it for him. It's okay, but I like oatmeal much better. When I was grocery shopping the other day I saw Coco Wheats--chocolate flavored Cream of Wheat. Neat! I just knew that Dave would love it, so I bought a few boxes. It turns out that Dave prefers the original Cream of Wheat, but I now love the Coco Wheats. Who would've thought?
When I was cooking the Coco Wheats for breakfast over the weekend I was thinking that the cooking method is very similar to polenta. I wondered if it would be possible to cook the Coco Wheats, let it cool, and then pan fry it the way I do with polenta. So, I made a really big batch of Coco Wheats, using less liquid than usual, and saved the majority of it for pan frying the next day. I spread the cooked cereal in a large baking dish so that it was about 3/4" thick, and kept it in the fridge over night. 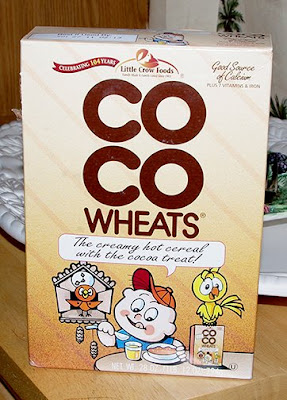 After the Coco Wheats were chilled and very firm, I cut them into squares and pan fried them in a little bit of oil over medium heat. I cooked them just until the ends were crispy and the middles were nice and hot. I served them with Maple Syrup.

They were SO yummy. I love my pan fried Coco Wheats. I have been making them for dinner because I love them so much. Since I use water instead of milk, and no butter, this is a vegan dish. And, it's not sweet. The Coco Wheats do not have any sugar, just unsweetened cocoa.

Sometimes when I make up recipes things turn out rather badly. This time though we have a winner--well, at least for me. I am really, really loving my Coco Wheats! 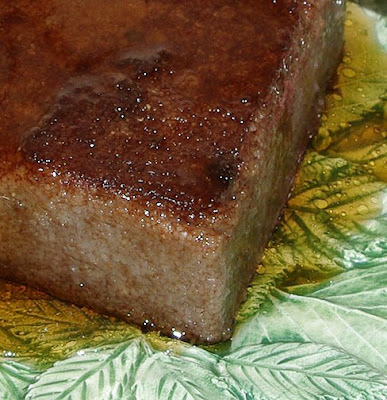