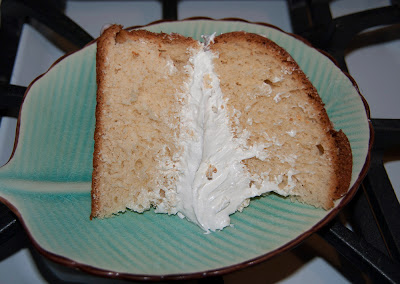 This is a recipe for an old-fashioned kind of coffecake. It's basically a yeasted dough similar to danish dough but not quite as rich. Then, there is a custard filling and a crumb topping. And it's huge! If you make the whole recipe it's twenty servings. When I saw the photo of it at the King Arthur site it looked like there was very little custard compared to all the dough. So I decided that I was either going to double the custard recipe or come up with a different filling. I decided on whipped cream for the filling because I had something similar in Ireland and it was delicious. I also changed the topping from the crumb version to a powdered sugar icing to make it a bit moister.

The coffeecake was delicious the first day, but by the second day it had really dried out. I would make half the recipe next time and only fill it right before serving so I could keep it wrapped tightly in plastic wrap. If you're having a brunch or something this would be perfect because it is so large.

Jill and I baked this together so check out her version. She followed the original recipe so you can get an idea of how it's supposed to look.