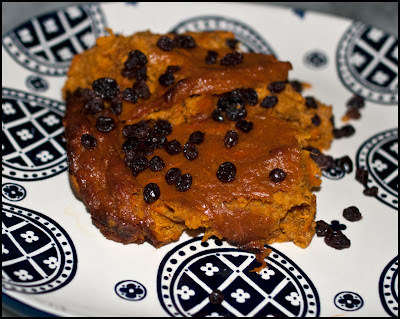 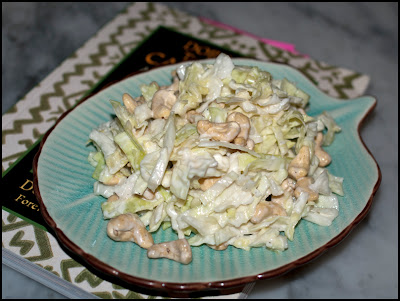 I found a book on Caribbean cooking at a used book store. It's Dorinda's Taste of the Caribbean: African-Influenced Recipes from the Islands. It's a neat book and there are quite a few veg and vegan friendly recipes. So far I've made Cabbage, Carrot, and Cashew Salad and Sweet Potato and Pumpkin Pudding. Plus, One Can, which you can read about here.

The cabbage salad was delicious--it's really more of a coleslaw, but the cashews add a nice crunch. I used vegan mayo, as I always do. Like a big dummy, I forgot to add the carrots, so I think the salad would be even better with those added.

The sweet potato and pumpkin pudding is delicious and it's more savory than sweet, though I think it would make a nice dessert served warm with a scoop of vanilla ice cream. You could make it even sweeter by adding some extra sugar and extra cinnamon.

In a large salad bowl, combine the cabbage, carrots, and cashews. In a separate bowl or jar, mix together the mayo and milk until smooth, and pour over the salad. Stir well, season with salt and pepper, cover, and allow to stand in the fridge for about 30 minutes before you serve.

In another bowl, combine the coconut milk, sugar, and butter and then pour this mixture into the sweet potato mixture. Stir to mix well. Grease an 8 to 10 inch square baking dish or a loaf tin. Pour the mixture into the dish and bake in the middle shelf of the oven for about 45 minutes to 1 1/2 to 2 hours, or until cooked. Pudding should be flat, sticky, and dark.

To serve, remove from the oven and let stand for 10 to 15 minutes before serving. Serve with cream for topping if you like.