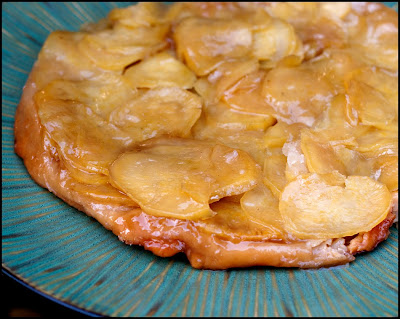 Sweet Potato Tarte Tatin is rather an unusual dessert since a tatin is typically made with apples. But, it's very good. And pretty. And quite simple. And something I want to make again and again.

This is a take on Apple Tarte Tatin, but using very thinly sliced sweet potatoes. I saw the recipe in the cookbook DamGoodSweet, but at the time I decided that I wanted to make this, I didn't have the book at hand. So, I sort of made up the recipe as I went along. I melted a knob (about 1/3 of a stick) of butter in my cast iron skillet along with some sugar (maybe 1/2 of a cup). I let the butter-sugar mixture cook until it was light brown. I added one layer of sweet potatoes (I used 2 medium potatoes), sprinkled on a bit of sugar, and then added a second layer along with a bit more sugar. Taking the skillet off the heat and letting it cool slightly, I covered the potatoes with pie dough and tucked in the edges to make it fit. I stuck the skillet in a 350F oven until the pastry was golden brown--30 minutes or so. I let the tart cool for about 10 minutes and then flipped it out onto a serving platter so that the pastry was on the bottom.

Yum! I ate it plain but Dave added a scoop of vanilla ice cream. The tatin is lovely when it's warm and gooey, but it is also delicious the next day at room temperature.

You could make this a vegan dessert by using margarine and vegan pie dough.

You can find the full recipe at The Washington Post.

Here's a link to the cookbook:
DamGoodSweet: Desserts to Satisfy Your Sweet Tooth, New Orleans Style