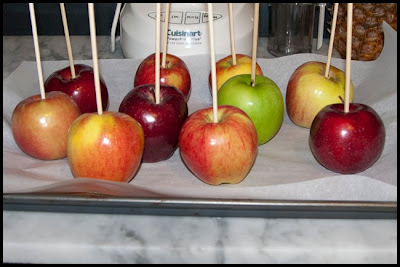 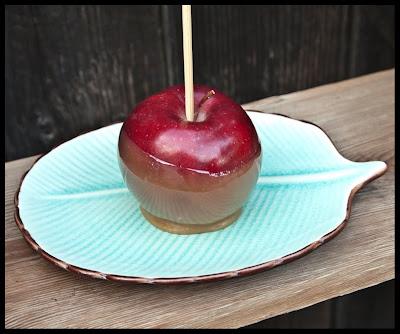 I wanted to try making a vegan version of caramel apples--most caramel is made with cream. I used a recipe from Baked and swapped out the dairy products for vegan products. Butter is easy to replace since there's quite a few vegan margarines available. I wasn't quite sure what to do for the cream--I went back and forth with different ideas, but I finally settled on the original MimicCreme.

MimicCreme has a nutty taste and on its own I don't like it all much. But mixed with things like chocolate, the taste isn't noticeable. I was hoping that the nuttiness wouldn't be a predominant flavor in the caramel. I also didn't know if non-dairy cream would make a caramel thick enough to coat the apples, but the consistency ended up being fine.

Taste test--the caramel apples were really good and the MimicCreme was subtle enough that I didn't mind it. (I did add extra vanilla though.) Until it was completely hardened, the caramel was so sticky. So, so sticky. I'm not sure if it's supposed to be that way or not. Once it was hardened, it was fine. I made the mistake of putting some of the just-dipped apples onto a plate instead of on parchment, and when I tried to pull them off they were stuck solid. I had to scrape them off with a knife. Use parchment!

Here's the original recipe and my changes.

Wash and thoroughly dry the apples. Remove the stems, then set them on parchment-lined baking sheets a few inches apart. Insert a small dowel, sharpened on one end, about three-quarters of the way through each apple.

Simmer the vanilla and cream over very low heat for 10 minutes. Do not let the mixture boil. Remove from heat and pour the mixture through a fine-mesh sieve into a bowl to remove the vanilla bean.

Return the vanilla cream to the pot, then add the sugar, corn syrup, and butter, making sure that the mixture doesn't splash onto the sides of the pot. Place the pot over very low heat and stir very gently until the sugar is dissolved, increase the heat to medium-high and clip a candy thermometer onto the side of the pot. Heat the caramel mixture, without stirring, to 245F.

Meanwhile, put a few handfuls of ice in a medium bowl that is large enough to accommodate the pot with the caramel mixture.

When the mixture reaches 245F (and stays there for at least 1 minute), remove from heat and place pot on top of the ice for 30 seconds to slow the cooking. Remove the pan from the ice.

Tilt the pot toward you to create a big pool of caramel and, working fast, immediately begin dipping the apples in it. Dip each apple only once, and don't worry about coating it evenly or completely. Return the caramel-dipped apples to the baking sheet and refrigerate until set, about 10 minutes.