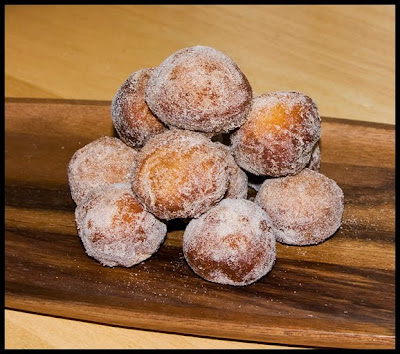 The October 2010 Daring Bakers challenge was hosted by Lori of Butter Me Up. Lori chose to challenge DBers to make doughnuts. She used several sources for her recipes including Alton Brown, Nancy Silverton, Kate Neumann and Epicurious.

I've made non-vegan donuts before, but this time around I wanted to go dairy-free. I like cake-style donuts and yeasted donuts equally, but I think to make cake donuts you need the thing that drops the batter into circles. Yeasted donuts seemed easier and immediately do-able.

This is the recipe I used and I'm fairly happy with it. The dough rose well and the donuts were light and fluffy, even with the flax and mashed potatoes.

I made donut holes instead of big donuts since they are Dave's favorite, and I didn't do a filling but instead dropped the warm donuts into a cinnamon-sugar mix. Pretty yummy! But, the next time I make these I'll add some flavoring to the dough since by itself, it doesn't have much flavor. Maybe some almond extract or vanilla or citrus or cinnamon. I may also do a filling and I think jam would be delicious, or perhaps a vegan chocolate custard.

The bottom line is that this is a good recipe to use as a starting point if you'd like to make a vegan yeasted donut. The donut holes I made were quite good, especially warm out of the cinnamon-sugar dunking.