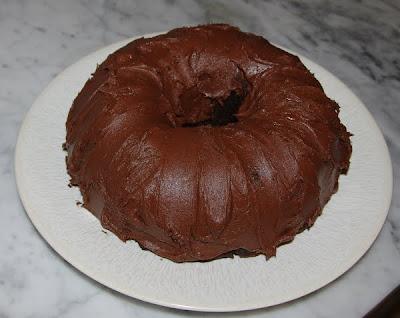 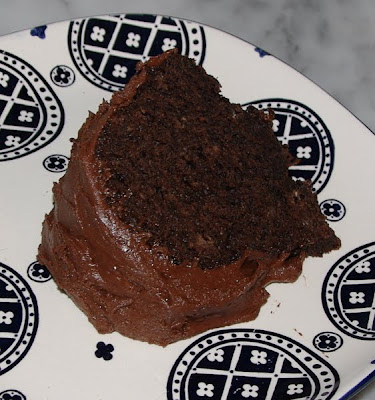 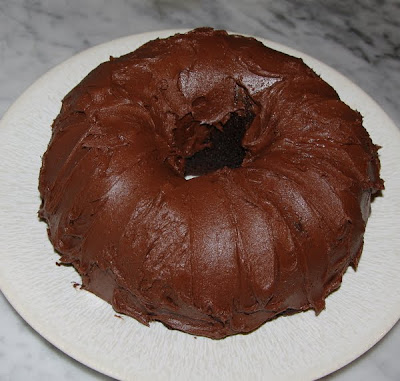 Dave is going to be away, except for a few hours here and there, for the next five weeks. We're not going to have a weekend together until some time in September. So, this last week we've been trying to get a bunch of things done before he leaves, and also spend some time together just goofing around. I have been cooking--as usual--but I've not spent time in front of the computer for at least a week.

The recipe is from the fabulous book Baked.
Baked: New Frontiers in Baking

When I was icing the cake, I tasted the frosting and I thought it was just too sweet. But after leaving the cake overnight, the flavors came together and the sweetness was more subdued. The cake stayed nice and moist for several days, and was a huge hit with Dave.

To make this cake even more special, serve it with vanilla ice cream in the spirit of a root beer float.

Preheat the oven to 325F. Generously spray the inside of a 10-inch bundt pan with nonstick spray; alternatively, butter it, dust with flour, and knock out the excess flour.

In a small saucepan, heat the root beer, cocoa powder, and butter over medium heat until the butter is melted. Add the sugars and whisk until dissolved. Remove from the heat and let cool.

In a large bowl, whisk the flour, baking soda, and salt together.

In a small bowl, whisk the eggs until just beaten, then whisk them into the cooled cocoa mixture until combined. Gently fold the flour mixture into the cocoa mixture. The batter will be slightly lumpy--do not over-beat, as it could cause the cake to be tough.

Pour the batter into the prepared pan and bake for 35 to 40 minutes, rotating the pan halfway through the baking time, until a small sharp knife inserted into the cake comes out clean. Transfer the pan to a wire rack to cool completely. Gently loosen the sides of the cake from the pan and turn it out onto the rack.

For the frosting: Put all the ingredients in a food processor. Pulse in short bursts until the frosting is shiny and smooth.

Use a spatula to spread the fudge frosting over the crown of the bundt in a thick layer. Let the frosting set before serving, with the ice cream on the side.