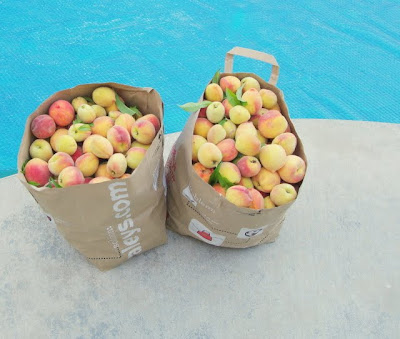 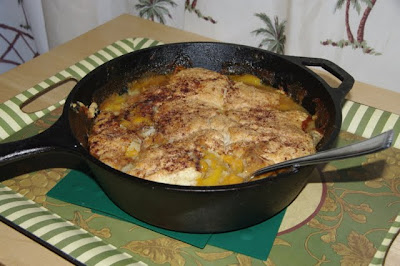 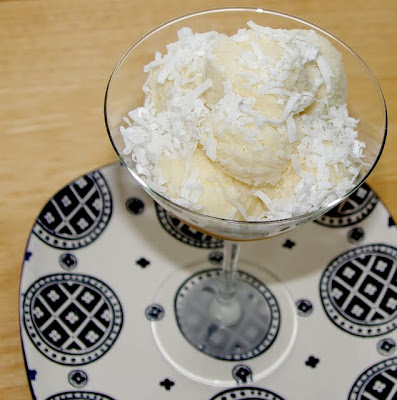 A couple years ago I bought a tiny peach tree from the grocery store for about $5. I'd never really wanted a peach tree; I liked nectarines and apricots much better than peaches, but this poor tree was the very last one in the box and it was sitting in the full sun in 100-degree weather. I felt really sorry for it, and though I rather suspected that it was dead, I went ahead and purchased the little tree to try and revive it.

I planted the tree in the middle of our backyard and watered it every day. Nothing happened for several weeks, but then one day there were little leaf buds showing. I still wasn't expecting peaches, but I was just glad that the tree had survived.

Well my tiny little peach sapling has grown to be a huge tree, and it produced massive amounts of fruit this year. I'm now a peach lover since homegrown peaches just taste so fresh and amazing.

The first thing I made this year was Tyler Florence's Bourbon Peach Cobbler. It's a nice recipe for summer since it's quite simple to whip up, serves lots of people, and has more flavor than most cobblers because of the bourbon and cinnamon. It's also vegan-friendly if you use soy creamer and vegan margarine. If you don't want to use the bourbon, you can substitute apple or orange juice.

To serve with the cobbler, I made vegan coconut milk "ice cream". Since the ice cream isn't made with a custard, it's not as smooth and rich as those made with eggs and cream. It has more of an icy texture but also a very pronounced coconut flavor. I actually prefer non-dairy ice creams; I like the less rich taste and texture.

Here's the recipe for the coconut "ice cream".
It's rather a blank slate, and you can stir in nuts, fruit, or chocolate before freezing. I think it's delicious as is, but it would be fun to do a tropical version with pineapple and maybe some mango.

If you're interested in dairy-free "ice cream" recipes, here are a couple more that I've made recently:

And here's a fabulous vegan-friendly chocolate cake to go with your ice cream:
Skillet Cake