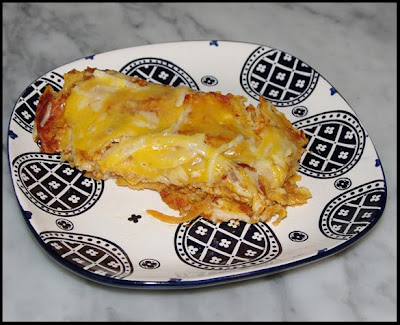 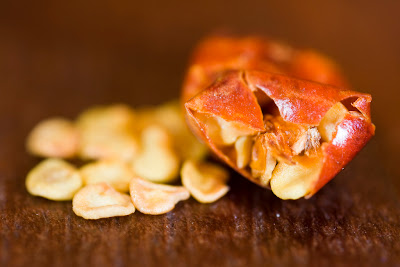 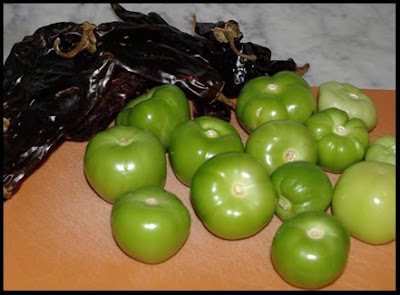 I saw this recipe in the Penzey's catalogue; I've made enchiladas before, but never the sauce to go along with it.

The sauce was delicious and the enchiladas were perfect. I did make some changes to the recipe since I didn't want the sauce to be too smoking hot. Instead of using 1 lb. of dried chiles, I used about 1/2 lb. I also added a can of whole peeled tomatoes that I'd hand-crushed since I cut back on the chiles. I did not fry the tortillas in oil, instead I dipped them in the hot enchilada sauce to soften. Even though the recipe doesn't call for it, I baked the pan of enchiladas in a casserole dish at 350 F for about 10 minutes, just until all the cheese was melted.

If you're not familiar with them, tomatillos are a cousin to tomatoes. They have a weird papery husk surrounding the fruit, and when you peel it off the tomatillo is sort of waxy and sticky. I think they taste sort of like a tomato, but a little more tart. Here's an LA Times article on cooking with tomatillos.

This recipe makes about 20-24 enchiladas, and if you have leftovers, they are great for breakfast topped with fried eggs.

If you want to make a vegan version, you can stuff the tortillas with any cooked veggies or beans, and use vegan cheese if you like. Or, you could use the sauce over scrambled tofu.

As an aside, here's a neat chart of the different types of chili peppers.

Preheat oven to 375F. Peel the husks off the tomatillos, rinse them, and then halve them. Drizzle with the oil and place the tomatillos cut side down along with the onions and garlic on a baking sheet. Roast them until soft, about 30 minutes. While the tomatillos are cooking, place the chiles in a stockpot and cover with water. Bring to a boil and cook for 10 minutes. Drain. Once cool enough to handle, pull the peppers open and discard the stems and seeds. Mix the peppers with the roasted tomatillo mixture, oregano, black pepper, and any juice from the roasting pan. Puree in a blender until smooth, adding water as needed. Add salt to taste.

*Here is where I deviated from the recipe. Instead of heating the tortillas in oil, I cooked the sauce in a pan until it simmered, and dipped each tortilla in the sauce.

Heat a small amount of oil in a large skillet over medium heat. The tortilla is first bathed in the sauce and then goes straight into the pan with the hot oil to soften it a bit. Add more oil as needed. Flip the tortillas once, 5 seconds per side. Remove the tortillas from the oil and sprinkle with cheese and onion (if using), and roll. Set each enchilada seam side down on an angled pan to drain the grease. Once drained, transfer to a serving dish and top with additional sauce and cheese.