When Jill and I made the yeasted 9-grain bread awhile back I cooked the extra cereal I had and froze it to use later, which I did in this multi-grain quick bread. I didn't have an exact recipe to use, so I sort of made things up as I went along. The bread turned out to be delicious--mildly sweet, moist, and full of lovely grains and raisins.

I used this recipe as a template, but used cooked 9-grain cereal instead of the 5-grain, and added extra raisins and some chia seeds. I wasn't sure if Dave would love the bread as much as I did since it wasn't filled with sugar or chocolate, but I snuck a few pieces in his lunch and he gobbled them up and even called to say how yummy the bread was. Healthy and tasty. Neat. 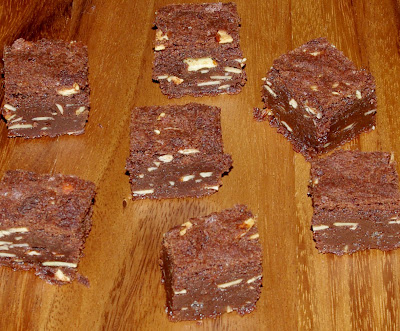 I saw this brownie recipe in Saveur, and since it was so easy I made a batch one night after dinner. I prefer fudge-y brownies as opposed to those that are more cake-like. The interior of these brownies was dense and moist, but the edges and top turned out to be a bit dry. I think that the cooking time is much too long in the recipe. I took my brownies out of the oven after about 40 minutes and I think that they were still over-baked. Also, there is too much butter in the recipe and the end result was an almost greasy brownie.
The recipe is from the original 1911 Fannie Farmer cookbook. On Saveur, the brownies get rave reviews, so perhaps I somehow goofed up the recipe? Maybe I would have liked them more with a shorter baking time. I think that this is a recipe I'll have to re-visit and maybe do a bit of tweaking on.