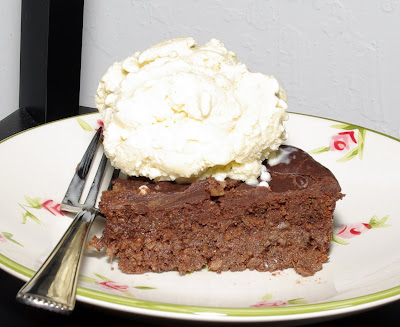 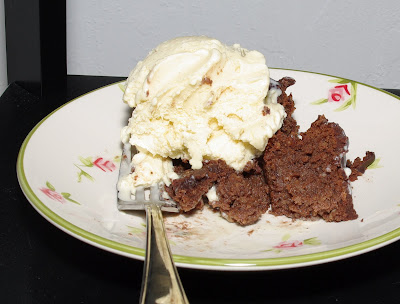 I saw this recipe in Vegetarian Times, and at first I dismissed it as being rather weird. But I reconsidered later thinking that since I love sweet potato pie, maybe this would be interesting.

It's not just interesting, it's fabulous! There is no overwhelming sweet potato flavor, and the chocolate doesn't make it really rich. In fact, it's a very light dessert with lots of good things like cocoa powder, dark chocolate and sweet potatoes.

I made some changes to the recipe. I added cinnamon, hemp seeds, and chia seeds. I really like the addition of the seeds as they give the torte a bit of texture, and they add lots of nutritional value. And cinnamon worked great with the other flavors.

I think this is going to be my new go-to chocolate "cake". It's quite low in calories compared to most cakes, and is still really delicious. Plus, it's surprisingly nutritious for a dessert.

I served the torte with Vanilla Bean Gelato which I made using a recipe from Making Artisan Gelato by Torrance Kopfer. Gelato was another of my food goals and I'm now able to cross that off my list. I think I'm about halfway done!

Split vanilla bean in half with a knife and remove seeds. Place the seeds and vanilla bean pod in a medium saucepan. Add the milk and 1/2 cup of the sugar. Stir to combine. Place over medium heat and cook, stirring occasionally, until the mixture registers 170F. Remove from the heat, cover, and let steep for 1/2 hour.

Remove the vanilla bean pod and place the steeped mixture back on the stove top over medium heat. Warm, stirring occasionally to keep the bottom from scorching, until it registers 170F.

In a medium bowl, whisk together the egg yolks and remaining 1/4 cup of sugar until foamy and slightly thickened.

Carefully temper the egg yolks with the hot milk mixture by slowly adding about half of the hot liquid into the eggs, whisking continuously. Whisk the heated egg mixture into the saucepan with the hot milk and return to the stove. Stirring continuously with a wooden spoon or heat-proof spatula, cook the mixture over medium heat until it registers 185F or is thick enough to coat the back of a spoon. Remove from the heat.

Pour the heavy cream into a clean, large bowl set over an ice bath.

Pour the heated custard through a fine-mesh sieve into the cold cream, add the vanilla, and stir until fully incorporated. Stir occasionally until the mixture has cooled. Remove the bowl from the ice bath, cover, and chill in the refrigerator for at least 8 hours.

When ready, pour the chilled mixture into the ice-cream maker and process according to the manufacturer's specifications.