Doughnuts with Lisa and Another Goal Accomplished! 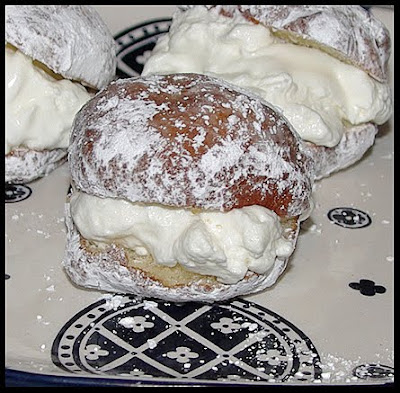 My friend Lisa (yes, THAT Lisa of Daring Kitchen fame) and I decided to make doughnuts together. I've been wanting to try and recreate the most amazing doughnuts in the whole world that Dave and I had in Ireland.

We were in the small town of Clifden on the west coast, and for some reason we were up and about extremely early in the morning. Driving through town I spotted a woman carrying a tray of pastries across the road from what appeared to be her home, to a small bakery. (I have eagle eyes for good food.) Of course we had to try fresh made Irish pastries. We went into the bakery and bought two of the "cream puffs" from the woman. I was assuming that they were cream puffs because that's exactly what they looked like--rounds of dough filled with whipped cream and topped with powdered sugar.

Cream puffs are made with a choux dough without yeast and are baked. The Irish "cream puffs" were a whole different thing entirely. My best guess is that they were made with a yeasted doughnut-type dough--super light and airy, and that they were fried. Like a cream puff they were split in half and filled with (unsweetened) whipped cream and topped with copious amounts of powdered sugar. Sublime.

This is the recipe I used to make the doughnuts. They came out light and fluffy, just as advertised. I made half the recipe and instead of full-sized doughnuts, I made minis. I filled about 10% with whipped cream to eat now, and froze the rest to enjoy later. I have to admit, my doughnuts came pretty close to the ones we had in Ireland, though perhaps no quite as light and fluffy. I think if I would have made full-sized doughnuts they would have been fluffier. Still, these were really amazing and I can officially cross "Irish" doughnuts off my goal list.

Please visit Lisa's blog to see her picture perfect doughnuts. She was much more creative than me and had a variety of yummy toppings. She even made the official doughnuts with the hole in the middle!