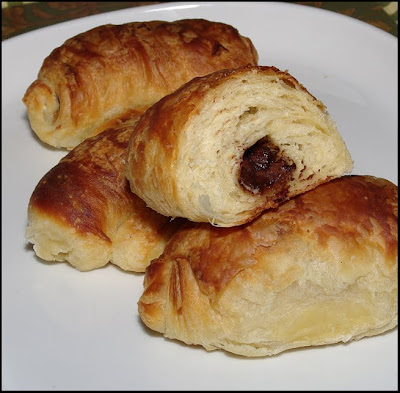 When I made croissants a bit ago, I froze about 2/3 of the dough to use later. I defrosted part of the dough this weekend to make chocolate croissants for breakfast. Even though the dough had been frozen, the croissants were amazing--still just as flaky, tender and buttery as the first time.

For baking the chocolate croissants I followed the original recipe, but I added a small amount of chocolate when I rolled up the dough. I also rolled the croissants into a rectangular shape instead of a crescent shape. I did goof up by forgetting that I had the shaped croissants rising, and instead of letting them rise for about 90 minutes, they rose for about 3 hours. They turned out a bit puffier than necessary, but still really delicious.

I think some people shy away from making bread as the recipes can be so large, and sometimes revamping the recipe to make less can be such a hassle. Since I usually cook for just the two of us, I've come to embrace my freezer, and frequently freeze bread doughs to bake later. It usually works out really well, and I love having homemade croissant, or pizza dough on hand.

When I make breads, or even pie dough, I divide the dough into individual portions, and each portion I wrap in plastic and put in a ziplock bag. The night before I want to use the dough I defrost it in the fridge. If it's a yeast dough I shape it, and then let it have a final rise.

The one big probelm I've had is that I've not labeled the ziplock bags and so I've defrosted "mystery" doughs and not know what to do with them. In that case I always make cinnamon rolls, as that seems to work with most doughs.

I usually try to use my frozen dough within a couple months, though I'm not sure if that's an "official" recommendation, or just a habit I've gotten into.

These croissants were so yummy that Dave, who is not a morning person on the weekends, rolled out of bed at 5am to have some fresh from the oven.