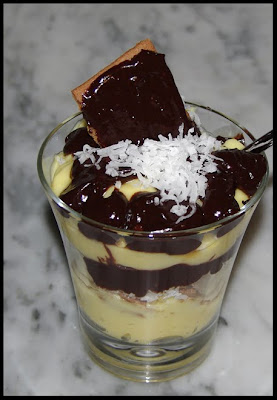 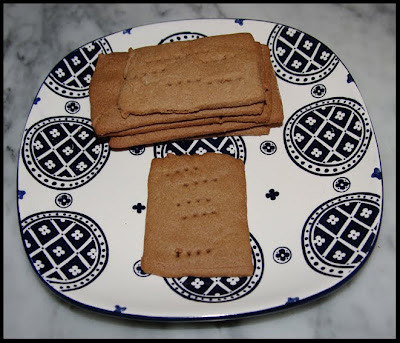 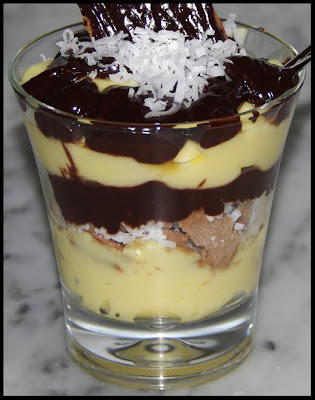 The January 2010 Daring Bakers’ challenge was hosted by Lauren of Celiac Teen. Lauren chose Gluten-Free Graham Wafers and Nanaimo Bars as the challenge for the month. The sources she based her recipe on are 101 Cookbooks and http://www.nanaimo.ca/.
If you're not familiar with Nanaimo Bars, they are composed of a graham cracker-coconut-almond base, a layer of custard, and a layer of chocolate. They originated in Nanaimo, Canada which is on the east coast of Vancouver Island. I've actually been there, but sadly I didn't sample any Nanaimo Bars during my trip.
Instead of making bars, I made more of a parfait. I did use the three components of the original recipe--graham cracker/coconut/nut mixture, custard, and chocolate. The recipe I used for the graham crackers is from Gale Gand. I tweaked it a bit by adding 2-3 tablespoons of cocoa powder, a little extra honey, lots of extra cinnamon, and instead of rye flour I used barley flour.
I think traditional graham crackers are made with graham flour, but it's not always that easy to find.
Here's what wikipedia has to say about graham flour:
Graham flour is a type of whole wheat flour named after the American Presbyterian minister Rev. Sylvester Graham (1794-1851), an early advocate for dietary reform. Rather than simply grinding the whole grain wheat kernel (bran, germ, and endosperm), in graham flour the components are ground separately. The endosperm is ground finely, initially creating white flour. The bran and germ are ground coarsely. The two parts are then mixed back together, creating a coarse-textured flour that bakes and keeps well. A fully correct substitute for it would be a mix of white flour, wheat bran, and wheat germ in the ratio found in whole wheat.
The graham crackers were fabulous and the parfaits really good as well. I will have to take another trip to Vancouver Island since I love it there, and also now I want to try Nanaimo bars in their home environment.
Here is the link to the graham cracker recipe.
And, please check out The Daring Kitchen to see all the amazing Nanaimo Bars!