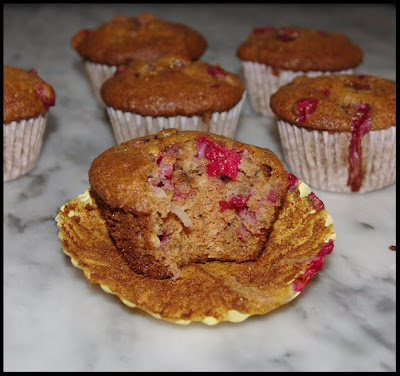 I saw this recipe, Glorious Morning Muffins, on the side of a flour package. The name holds such promise--Glorious Morning--that as soon as I spotted the recipe I wanted to make the muffins.

I did make some changes though. I used defrosted frozen cranberries instead of the apples, carrots and raisins. I also added extra coconut and used walnuts instead of pecans. Instead of 100% all-purpose flour, I used a mixture of white flour, whole wheat and barley flour.

Muffins rarely impress me as I'm usually just not that fond of them. They're ok, but I'd rather have yogurt, oatmeal, or cereal for breakfast. I think I distrust muffins because at least on the outside, they seem so healthy and good for you; but so many muffin recipes are full of sugar and fat--you might as well eat a piece of cake. So though I had high hopes for this recipe because of the name, I wasn't really expecting much.

I must admit that I was so wrong. These are really delicious and I think it's because of the tartness of the cranberries and the mix of whole grain flours. They're definitely not sugary-sweet, and though perhaps not health food they do have some redeeming nutritional value.

I'm not sure if my morning was truly glorious after eating these muffins for breakfast, but they sure left a big smile on my face.