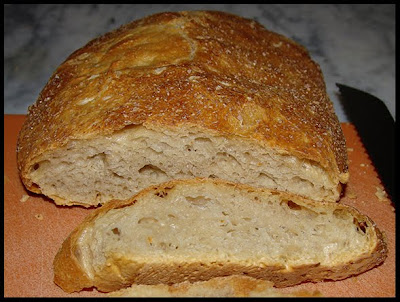 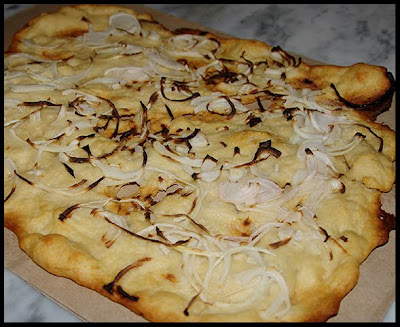 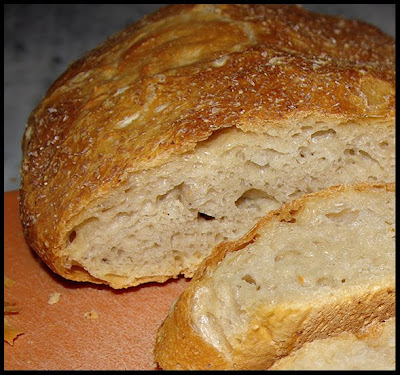 Four posts below I mentioned Jim Lahey's No-Knead Bread Cookbook, and now I can say that I've tried a couple of his recipes. I first made his basic bread recipe. I let it rise for about 18 hours and then baked it in an enameled cast iron casserole at a scorchingly hot 475F. The dough itself looked rather limp and very unimpressive, so I didn't think the bread would be all that great. But I was wrong--the bread was phenomenal. The crust was cracker crisp and the interior was light and full of flavor. I was so impressed because this was certainly the best loaf of bread I've ever baked. I didn't even know it was possible to bake such good bread in a basic home oven. The only problem I had with the recipe is that it's not super easy to transfer the bread dough to the hot casserole pan, and so I ended up with a burn on my hand. I think that next time I'll add more wheat bran to the outside of the dough so that it's less sticky and easier to transport.

I also tried Jim's onion pizza recipe and I didn't meet with as much success as I did with his bread. The dough is pretty similar except that there is more yeast in the pizza dough, a little sugar, and only a two hour rise. His pizzas are supposed to come out very thin and crisp--like a cracker. My pizza was thin and crisp, had good flavor, but seemed a bit dry. It may just be that I'm not used to that type of crust and the next time I make it I'll love to more than I did. Or, I may have somehow messed up the recipe. Or, thinking about it, it may be that there is so sauce--just crust and onions. The dough itself seemed really delicate, and it was as if there was almost no gluten development. Perhaps it's that I needed to let it rise longer since it's really cold here right now. Regardless, I will try making it again, and hopefully it will be even better the second time.

I am so totally in love with Jim Lahey, his book, his bakery, his bread... I love that the bread is so simple to make, and yet so outrageously delicious. You can find his basic bread recipe here, and feel free to comment or e-mail me if you have any questions about the method or anything else.