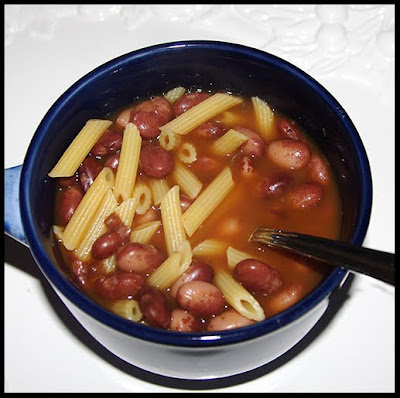 This was supposed to have been posted for Vegan Tuesday, but I'm a bit late.

I wanted to use some of the beans I bought on the road trip to make soup. I picked out the pink speckled ones that look sort of like kidney beans (they are officially called autumn bounty). I cooked them in boiling salted water until they were tender. They are sturdy beans since it took ages for them to cook all the way through.

When the beans were cool I drained them and added them to a pot of veggie broth. I used homemade broth (or stock--I'm never sure what the correct term is), but good quality canned would be fine. When the broth was boiling, I added a couple handfuls of uncooked pasta. I just let the soup slowly boil until the pasta was tender, checked the seasonings, and served. I didn't really need to add any spices or herbs since I was using a very tasty broth, but you can flavor this soup in whatever way makes you happy.