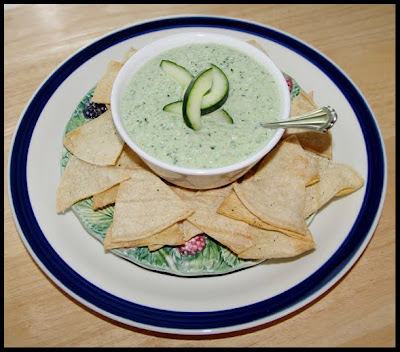 We've had a very hectic last few days. Over the weekend, we went up to the mountains. I've been cooped up for so long being sick, that I really wanted to get out of the house and away for a couple days. It was perfect weather, and we had a lot of fun. I have to go through the 400 photos I took, but I'll try to post some of them this week. On Monday, we had to go to San Francisco, and from there we ended up driving south to Half Moon Bay to enjoy the ocean. Not to swim, as it's too cold; but to watch the surfers and walk on the beach. Again, it was so nice to get out. 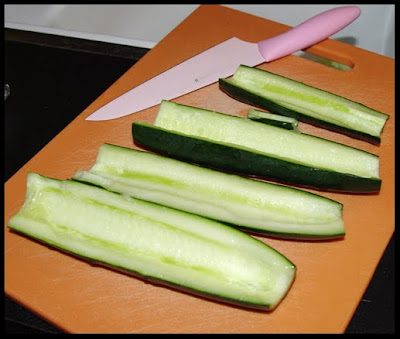 I wanted to make a quick meal that was cool and had lots of veggies, so I made a cold cucumber yogurt soup, oven baked tortilla chips, and sandwiches with diced cooked beets, walnuts, and goat cheese. It was a nice fresh meal and a good change from all the "on the road" food we ate all weekend.

To make the tortilla chips: Cut corn tortillas into small triangles, about 6 or 8 per tortilla. Lay the tortilla triangles in a single layer on a silpat or on another non-stick surface. Spray the top of the chips with vegetable spray and season with salt, and anything else you're in the mood for--paprika, chili powder, cumin, pepper, etc. Bake in a preheated 375F oven for about 10 minutes or so--just until they are lightly browned and start to crisp up.

This is the recipe I used for the cucumber soup, though I used all yogurt and no buttermilk. It would make a tasty dip for bread if made a bit thicker. http://www.epicurious.com/recipes/food/views/Chilled-Cucumber-Soup-15056 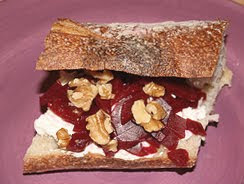