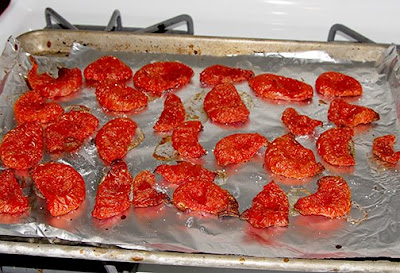 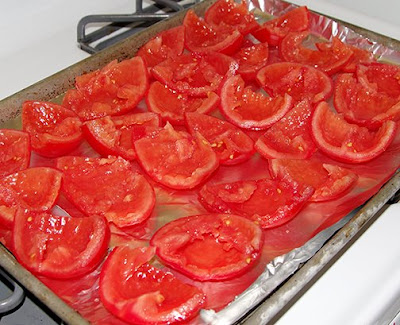 My neighbor across the street brought me a big box of her home-grown tomatoes. There were so many tomatoes I knew I wouldn't be able to use them up before they got all mushy and wrinkled. Dave is going to be away on and off for the next three weeks, and he is the one that loves raw tomatoes; I like cooked tomatoes better. So, I thought I'd try my hand at sun drying the majority of the tomatoes, using the oven.

I am not a huge fan of those sun dried tomatoes in oil that you can buy in jars at the grocery store. They are OK, but I think the texture is a bit tough and the tomatoes are slimy from all the oil. I decided to dry my tomatoes to the point where they would be still somewhat pliable; they could be stored in the fridge and the flavor would be enhanced from the drying, but the texture would not be too leathery.

I wasn't sure if this would even work because the lowest my oven goes to is 200F, and it is actually 75F hotter than it should, be all the time. I thought the tomatoes would cook before they had a chance to dry out. Fortunately, they dried just to the right point before they started to get too browned on the edges.

I love my oven dried tomatoes! The raw taste is gone but they are still a bit moist and a lovely texture--sort of like a good quality dried apricot. I think they will be great on sandwiches, and in pastas, and will make a nice pesto.

Here's how I made the tomatoes:
I sliced the tomatoes in half and cleaned out the seeds and the white parts. Then, spread the tomato halves in a single layer on a baking sheet covered in non-stick foil, and sprinkled them with sea salt. I turned my oven on the very lowest setting possible, and put the tomatoes on the top rack. I cooked them for about an hour, and then turned each tomato over, sprinkling the other side with salt and baking them for about another 90 minutes--just until the edges started to brown. I am going to store the dried tomatoes in the fridge since they are still a bit moist.

Flush with the success of my dried tomatoes, I am thinking about getting a food dehydrator. Does anyone have have one? Are they neat? My step-sister just bought one but ended up returning it since it needed to run for so long to dry out the produce. It would be nice to preserve all the lovely summer fruit, but I am usually not a gadget person and have a TINY kitchen. I guess I need to research!