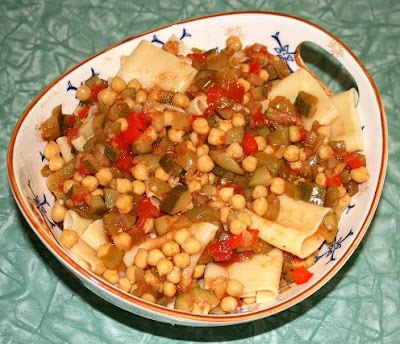 Sometimes, odds and ends leftovers can be repurposed into a new, fabulous dish. I love when that happens! I've come up with some of my best recipes by trying to use up stuff in the fridge.
I had a big ziplock bag about half full of sliced veggies leftover from the chickpea fondue. I also had some overly ripe tomatoes and some leftover cooked chickpes. What to make? Pasta sauce! It's possible to turn just about any cooked vegetable into a sauce for pasta or rice. 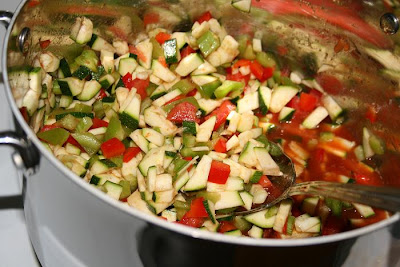 In my veggie bag I had mainly zucchini, plus bell peppers. There were also a few carrot slices and some celery. I diced all the veggies quite small and dumped them into a big sauce pot. I also diced up the tomatoes, removing as many of the seeds as possible without having to use something like tweezers--I am so impatient. After the tomatoes were diced, I squeezed as much of the juice out as possible into the pan, and then added the tomato pieces. I add some garlic, salt, pepper, and fresh thyme. There wasn't very much tomato juice in the pot, so I added some I had in the fridge, just about a cup. You could also use veg broth, or even water. You just need enough liquid to keep the vegetables from scorching. I could have sauteed the veggies first in olive oil for extra flavor, but I wanted to make the sauce as light, (and fat free), as possible. 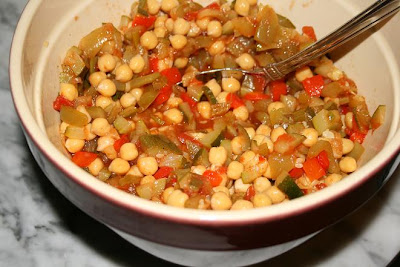 I cooked the veggies until they were just getting tender, and then threw in a couple handfuls of cooked chickpeas. I tossed the sauce with 1 lb of cooked pasta; since there was so much of the sauce it was almost like a veggie-pasta stew, but whatever it was, we loved it!

The next time you have a bunch of leftover vegetables lanquishing in your crisper bin, try making a pasta sauce. You may end up creating something quite wonderful!
Posted by Michele