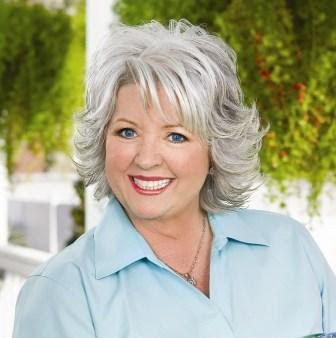 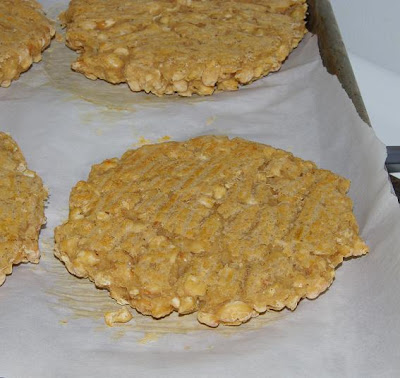 I don't watch Food Network shows anymore since we stopped watching TV altogether last year, but for awhile, I was a Food Network junkie. I especially loved watching Ina Garten's shows, anything to do with Jamie Oliver or Nigella Lawson, old Mario Batali re-runs, and sometimes Paula Deen. I always found Paula to be really funny, and down to earth. Her recipes are all pretty homey, and very accessible for the home cook. Admittedly, she doesn't make a huge amount of vegetarian dishes, but every so often she comes up with a meat-free gem. 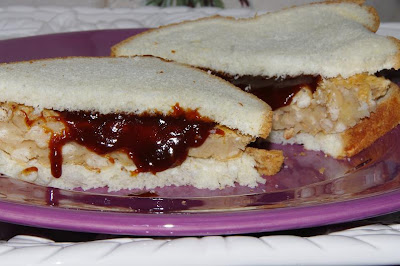 This is Paula's recipe for Bean Cake Sandwiches- leftover white beans formed into patties and fried. Paula cookd her beans with a ham hock, but I used some liquid smoke instead. Here is what Wikipedia says about liquid smoke: Liquid smoke consists of smoke condensates that are produced through the controlled burning of wood chips or sawdust. The resulting smoke is passed through water, which captures and dissolves the smoke-flavored components in solution. This base can be condensed and modified through many methods to develop a wide range of smoke flavors.
There are some health concerns concerning all smoked foods, but from what I've read, liquid smoke is filtered really well. Plus, I usually only use a couple drops each time I use it since it has such a strong flavor. 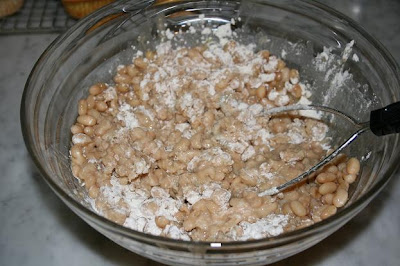 To cook the beans: Rinse dried white beans well, (I tend to cook about 1lb. at a time), and pick through them to look for pebbles or dirt. Soak the beans in a bowl of cold water overnight. In the morning, rinse the beans a couple times in cold water. Put the beans in a big pot. Add enough vegetable broth until the beans are covered by an inch or so. Season with some black pepper, a little salt, a few drops of liquid smoke, and some hot sauce. You can taste for seasoning as the beans are cooking and make adjustments. You can also add some very finely diced onion. Cook the beans until they are just tender. Cooked this way, you can use the beans in bean cakes, salads, soups, and even make baked beans. 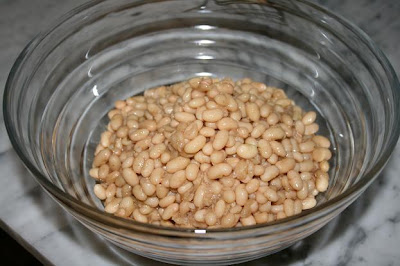 Once the beans have cooled a bit, you can make Paula's recipe:
Bean Cake Recipe:
3 cups leftover cooked white beans
all-purpose flour, enough to bind patties
oil for frying
In a medium bowl, coarsely mash beans with a fork and add flour until well combined. Shape bean mixture into 4 patties. Fry patties in oil in a medium skillet until lightly browned and crispy.
Paula serves her bean cakes on white bread with onions and mayo. I did use white bread, but instead of onions and mayo, I used BBQ sauce.
Also, I baked my bean cakes instead of frying them. I baked them in a 325F oven for about 20 minutes. They still came out browned and crispy.
Surprisingly, these bean cakes were really delicious. Super simple to make, but so tasty. I am definitely making them again, and may try to find ways to incorporate the cakes into other dishes.
This recipe is a keeper. Thanks Paula! 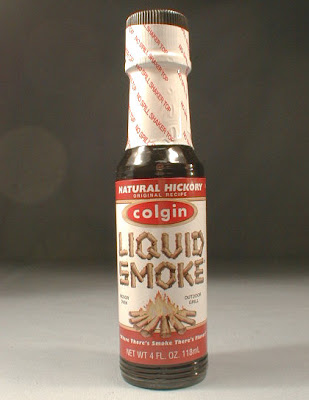