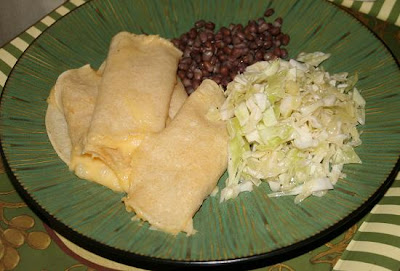 I saw the recipe for these tacos in the Cafe Flora cookbook and I had to make them. I'm so glad I did-cheesy mashed potatoes in crispy baked corn tortillas. Delicious and really unique.

Here's the recipe for the tacos:

Cook the potatoes in just enough boiling water to cover until they are tender, about 20 minutes. Then mash the potatoes with butter and salt and keep warm. In a small bowl, combine the cheeses and red pepper flakes and keep them nearby.

Preheat the oven to 400 degrees and have ready a baking sheet or roasting pan to hold the tacos. Heat 1/8 inch of vegetable oil in a skillet over medium-high heat and soft-fry the tortillas, without allowing them to become crisp, one at a time. (The tortillas should be oily and soft so they will crisp in the oven after they are filled.)

Fill each tortilla with 1/3 cup of the mashed potatoes, 1/8 cup of the grated cheese mixture and a generous tablespoon of the chopped pepper. Roll the tortillas around the filling and secure them with toothpicks. Arrange the tacos in a single layer on the baking sheet or roasting pan and bake until the cheese has melted and the tortillas are crisp, about 18 minutes. 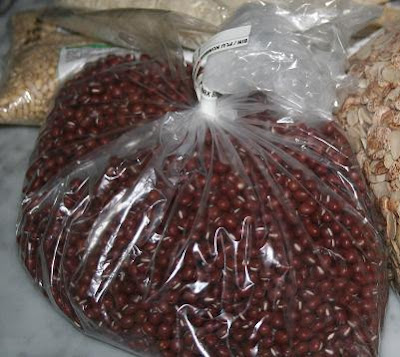 You could serve the tacos with some type of tomato based sauce if you'd like-salsa or enchilada sauce, but I served them with some simple beans and a tangy vinegar-oil coleslaw. The tacos have a very subtle flavor, so you should keep that in mind when picking side dishes. The tangy coleslaw works well with the richness of the tacos.

For the coleslaw: I mixed diced cabbage, red wine vinegar, canola oil, salt, pepper, and a little hot sauce. I cooked the beans in veggie broth, salt and pepper just until tender. They added a nice bit of texture to the meal.

If you'd like to try an unusual Mexican-type recipe, make these tacos!
Posted by Michele