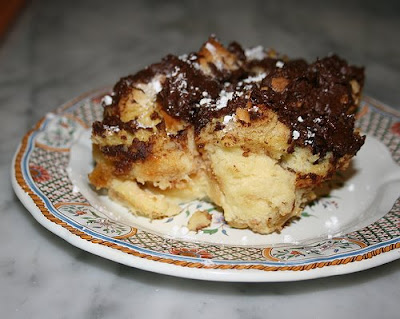 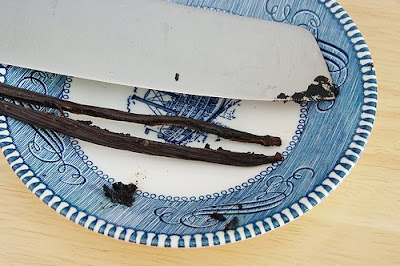 Dave is a big fan of bread pudding, so he was excited about this week's recipe-as if he doesn't get enough sweets already! Dave loves all those old-fashioned custard-y types of desserts:bread pudding, rice pudding, tapioca pudding, custard pies. His grandmother made them for him when he was growing up; she was a very frugal cook and made the same recipes over and over. She even made milk from dried milk powder to save a bit of money. Anyway, Dave loved her desserts and so I had to learn to bake them. We didn't eat things like tapioca pudding growing up. We were more into cookies and brownies. In fact, I don't even think I tasted tapioca until I was married.

I've made many versions of bread pudding over the years, and this is a nice recipe. I simplified the process a bit by topping the pudding with the chocolate, instead of having a chocolate custard. That way, I am able to eat around the chocolate; I'm not a big chocolate lover. This pudding was rich with the addition of cream, and fortunately not too egg-y.

The vanilla bean: My very lovely friend in Australia sent me a just-picked vanilla bean; she buys them at the farmer's market. I have to say that it is most fragrant vanilla bean I've ever encountered. It was super soft, and just packed full of seeds. I used the seeds in a cake recipe, but saved the pod to make vanilla flavored sugar, which I used in the bread pudding.
So, thank you, Joy-you wonderful Aussie, you!
Posted by Michele