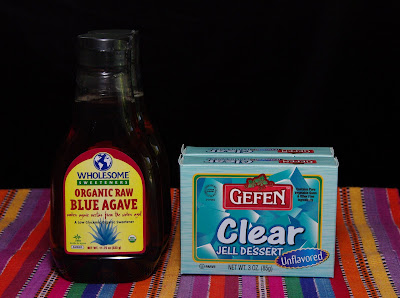 Yikes! I forgot the second part of the giveaway post. I'm a bit distracted as my oven was fixed this morning and I am composing lists in my head of baked goods I need to make ASAP. I never realized I was so attached to my oven until I didn't have it for 12 days, 4 hours and 17 minutes...

There are actually two things I'm giving away: the cupcake carrier and book, and then two of my favorite ingredients-vegan jell and agave syrup. It will be two bottles of agave syrup, and three packages of vegan jell.

So, I'll actually pick two names, and the first person picked can choose which package they'd like.

I already have a suggestion. Neat! Katya suggests that I change the name of the blog. I've been thinking of doing this for awhile, but haven't decided on anything concrete yet. My blog originated as an extension of my flickr account. For a long time, before I started the blog, I posted food photos on flickr. People were requesting recipes, so instead of typing the recipes in flickr, I started this blog. I really never thought I'd spend as much time as I do working on it. Anyway, my name on flickr is "striped tail", and so I just used that to name the blog. Does anyone have any comments or suggestions on the blog title? I do not want to change the URL, so keep that in mind.

Off to bake cookies. And...maybe biscuits. Or...perhaps a cake or two. I love my oven!
Posted by Michele