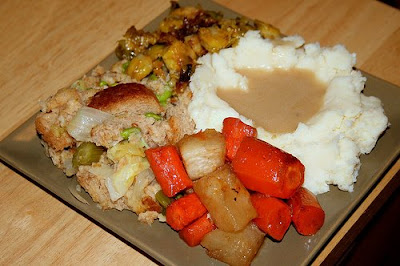 This is a "hungry man" vegan dinner. Super hearty, but without any dairy products. It consists of roasted Brussels sprouts, roasted carrots and turnips, stuffing, mashed potatoes and gravy. To make the Brissels sprouts: clean and trim the sprouts. If they are large, cut in half. Place in a baking pan and drizzle with a bit of olive oil and salt and pepper. Roast at 375F, turning several times, until tender. The carrots and turnips are cooked the same way. The mashed potatoes are just your basic mashed potatoes, except I used vegetable broth and vegan margarine instead milk and butter. To make the gravy: Follow the instruction for making a white sauce http://www.veggienumnums.com/2008/12/step-by-step-macaroni-and-cheese-part-1.html but instead of using milk, use vegetable broth. The stuffing is one of my favorite ways to use leftovers. I take all the odds and ends of frozen bread in my freezer and toast it in the oven. I break up the bread into pieces and put it in a big baking dish. I add all the leftover cooked veggies I can rustle up-usually carrots, peas, maybe some celery, or onion, and I add them to the baking dish. I season with salt, pepper, and a bit of hot sauce. I moisten the bread mixture with vegetable broth and maybe some melted vegan margarine. Mix everything well and bake in a 350F oven until the top is browned. 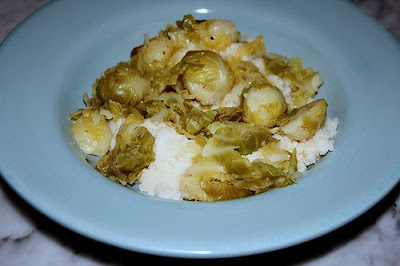 Bubble and squeak. This is a popular dish in the UK, though I think it is more typically made with cabbage-I used Brussels sprouts. To make it I used leftover mashed potatoes and some cooked (boiled) Brussels sprouts. Heat the potatoes in a skillet with a bit of butter or margarine. Add the cooked Brussels sprouts. When the potaoes are hot and a bit crusty on the bottom, it's done! Easy. 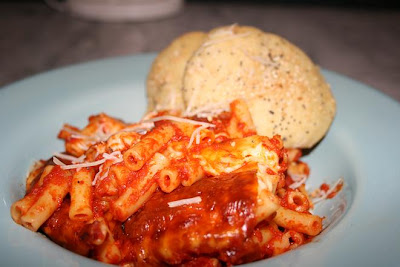 This is pretty much Dave's favorite dinner-baked pasta and garlic rolls. Cook pasta until it is a bit shy of being tender. Drain well. Mix the pasta with some prepared marinara sauce, a little grated parmesan, and some ricotta. Pour into a baking dish. Top with some shredded mozzarella. Bake in a 350F oven until bubbly hot. Cool a bit before serving. I used pizza dough to make the rolls. Take bits of dough and roll into small balls. Flatten a bit and place on a baking sheet. Drizzle with a bit of olive oil and top with some fresh garlic, and poppy seeds or sesame seeds. Bake at 400F until golden brown. Using 1 lb. of pasta will probably make enough to feed 4-6 people, or Dave.