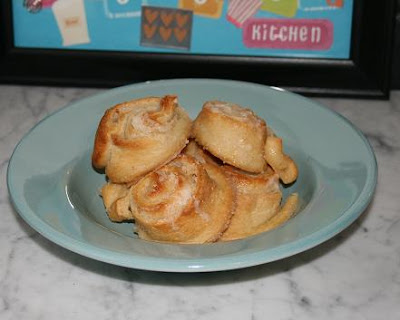 I wanted to make some cinnamon buns for Dave as a breakfast treat last weekend. Instead of making the dough from scratch, I defrosted some pizza dough, which works well for quick cinnamon buns. Sadly, when I went to make the buns, I found that I was out of cinnamon and brown sugar. So, I made these instead-buns filled with orange flavored white sugar. To make: roll out the dough into a large rectangle. Spread softened butter, or vegan margarine, over the dough. Spread a thin layer of sugar that has been flavored with orange oil and orange zest over the dough. Roll the dough into a log. Slice the dough into 1-2 inch slices. Place the slices in a well-greased muffin tin. Bake at 350F until the rolls are lightly browned. If you want to frost these: mix some powdered sugar with some milk until you have a thick paste. Season with orange oil or orange zest. Spread on the warm rolls.