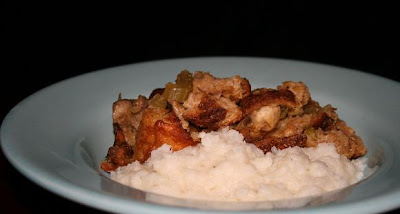 Here are a couple of dishes that I made for Thanksgiving.

For the turnips: Peel the turnips and cut into chunks. Put them in a big saucepan and cover them with water. Boil until tender. Drain the turnips and put them in a big bowl. Mash them with a potato masher, adding vegetable broth and vegan margarine until you get the consistency you like. Add salt and pepper to taste. You can also mash these with milk and butter instead of broth, if you are looking for a richer dish.

This is my basic stuffing recipe, though I make many variations: Toast a loaf of whole grain bread in the oven until it is dried out, or you can buy pre-packaged stuffing mix. In a large skillet, saute a couple of diced onions and a whole bunch of diced celery in a bit of olive oil. Cook until the vegetables are just tender and season with salt and pepper, to taste. Put the cooked vegetables in a big bowl. In the same skillet, add a bit more olive oil and saute 16 ounces of sliced mushrooms until just tender. Season with a little salt and pepper. Put the mushrooms in the bowl with the celery and onions. Break the bread slices into big pieces. Mix the bread and the vegetables together. Add enough vegetable broth to moisten the bread. You can also add some melted butter or vegan margarine, about 1 stick. Season with salt, pepper, hot sauce, and ground sage, to taste. Pour the stuffing into a big greased baking dish, at least 9x13, and bake in a preheated 325F oven for about 30 minutes, until the top of the stuffing is browned and crispy around the edges.
Posted by Michele