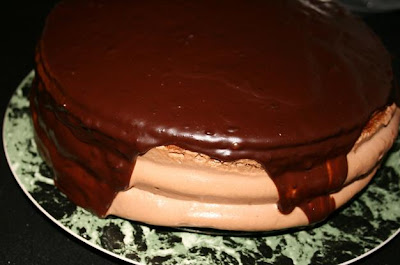 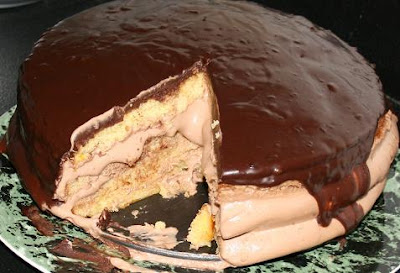 This is a recipe for a big, messy whipped cream cake. It is pretty amazing and large enough to serve many people. The original recipe, which I found at recipegoldmine.com, calls for a homemade sponge cake. To save time, I used a boxed cake mix. I found that the whipped cream was a bit too soft-I think it was the brand of cream I bought. In making this again, I will add a bit of vegan gel product to make the cream firmer. If you're not familiar with Nutella; it's a chocolate-hazelnut spread that's popular in Italy. You can find it at most grocery stores these days. The chocolate glaze recipe made much too much for the cake, I would probably cut in half next time.

Preheat oven to 350F. Line the bottom of a 10-inch springform pan with wax paper or parchment.

In an large bowl, beat the egg yolks with 1/2 cup of sugar, the water, vanilla, and lemon zest until pale yellow and tripled in volume.

In a separate bowl, with clean beaters, whip the egg whites until soft peaks form. Whip in the remaining 1/4 cup sugar, a tablespoon at a time, until stiff peaks form. Fold the whites gently into the flour mixture.

Spread the batter evenly in the prepared pan and bake for 35-40 minutes, or until the cake is golden brown and the top springs back when lightly touched. Set upside down on a cooling rack and cool completely before removing from the pan.

For the syrup: Combine the sugar and water in a small saucepan, bring to a boil, and boil until the sugar is dissolved and the mixture is reduced by 25%. Let cool, and stir in the rum.

For the filling: In a small bowl, whisk the Nutella with 1/2 cup of cream. In a mixing bowl, whip the remaining cream with the vanilla until it begins to hold its shape. Add the Nutella mixture and continue to whip until stiff.

For the glaze: Bring the cream and butter just to a boil and immediately remove from heat. Add the chocolate and let sit for 5 minutes to allow the chocolate to melt, then whisk until smooth. The glaze hardens as it cools-if it becomes too stiff to work with just warm it carefully over very low heat.

To assemble: Line a clean 10-inch springform pan with plastic wrap. Cut the cake into three even layers. Place 1 cake layer in the bottom of the pan and brush with 1/3 of the rum syrup. Spread 1/2 the filling evenly over the cake layer. Make a second layer of cake, syrup and filling. Finish with the remaining cake layer and syrup. Chill, covered, for two hours.

After the cake is chilled, make the glaze and let it cool a bit. Invert the cake onto a serving platter and remove the pan and plastic wrap. Pour or spread the glaze evenly over the top and sides of the cake. Allow the glaze to set before serving.

I know this recipe looks daunting but it is really not difficult if you just do it in steps. You could also just use the Nutella whipped cream, which is delicious, on a cake or dessert of your own. The chocolate glaze is also a useful recipe and can be used with other desserts or even ice cream.