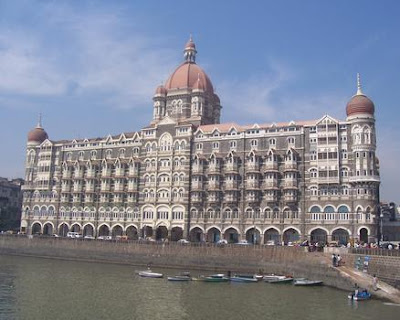 **photo taken from the web

I am so saddened by the recent terrorist attacks in Mumbai. My thoughts and heart go out to the families of the victims and to the survivors. I love India-it's one of my favorite places to travel to. I love the country and I love the people.

From the most recent news story: There were ten separate sites in Mumbai attacked by gunman. At least 150 people have been killed, including four Americans, and hundreds more people have been injured. It seems that the gunmen concentrated their attacks on Mumbai's financial and luxury tourist center. One of the hotels targeted was the Taj Mahal and it seems that foreign tourists were being singled out. Also, from what I've read, the hotel suffered extensive damage. The Taj is a stunningly beautiful hotel; it's a heritage building-built 105 years ago. I've not stayed there but I did have a meal in the restaurant. The food was over the top delicious. Even the drinks-I had a Bloody Mary made with fresh tomatoes; it was beyond wonderful.

India has a very capable military so I hope that the remaining terrorists will be stopped shortly and that all the captives will be rescued. I keep imagining how horrific it is for the remaining people trapped in the hotel, barricaded in their rooms without food or running water, not knowing who will arrive first, rescuers or terrorists. The situation is just heart-breaking.

One of the survivors is a two-year old boy-both of his parents, a young Rabbi and his wife, were murdered in the attack on a Jewish center. The little boy was found later in blood covered clothing, so it is assumed that he witnessed his parents being killed. His name is Moshe and today is his birthday. A fund has been set up to help the Rabbi's children and to rebuild the Jewish community center in Mumbai. If you are interested in donating, here is the link.