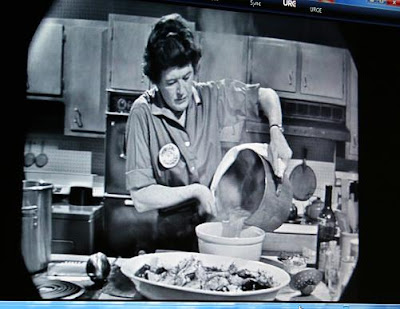 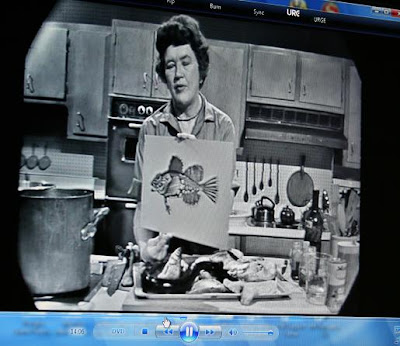 I love Julia Child. No, I LOVE Julia Child. I just found that Netflix has dvds of her early show, "The French Chef", available to rent. I've been watching them every free moment I have. When I was a youngster I used to watch reruns of Julia's shows on PBS. No cartoons for me, instead it was The French Chef and The Galloping Gourmet. Sadly, I've been neglecting Julia. I've been hypnotized by those flashy young things on the Food Network. (I actually stopped watching all tv at the beginning of the year, but before that I watched Food Network all the time.) Now that the French Chef and I have been reunited, I am delighted.

Being a vegetarian, many of Julia's recipes are unsuitable for me. Still, I just love watching her cook pretty much anything (though the fish heads in the fish soup grossed me out). Her knowledge of French ingredients, techniques, and recipes is encyclopedic. She's truly a culinary genius. I think many of Julia's recipes have fallen out of favor because they are so cream and butter laden. Still, you always have the chance of making lighter versions, or, saving those recipes for special occasions. Julia herself lived into her 90s and was apparently healthy throughout her life-she must have been doing something right.
Her are few Julia facts:
She was 6'2" and played college basketball
She was turned down for service in the US Navy because she was too tall
She was married to her husband Paul for nearly 50 years-he died in 1994
She attended the famous Le Cordon Bleu cooking school in France
She was awarded the US Presidential Medal of Freedom and the French Legion of Honor
She received an honorary degree from Harvard
She kitchen is now displayed at the Smithsonian in Washington, DC
Dave appreciates my interpretations of Julia Child's recipes, but he does not enjoy watching the French Chef dvds. He tends to make fun of her size, comparing her to a linebacker, and comments that she has a screeching voice that gives him a headache. Since his comments are so mean, he is barred from being anywhere near the computer when I am watching Julia on dvd.
Part of Julia's appeal is that she is so funny. She is funny, and also self-deprecating-in a good way. She never takes herself too seriously. In one of the episodes I watched, she used a rubber spatula in an electric mixer. The beaters broke the spatula in half and pieces went flying all over the kitchen. Julia wasn't even fazed; she just kept mixing and picked the pieces of spatula out of the bowl. She cooks like real people do, not like she has a prep staff doing the cooking for her.
If you are at all interested in classical French cooking, I urge you to rent the French Chef dvds. Even if you are not inspired by the recipes, Julia is really fun to watch.
Posted by Michele