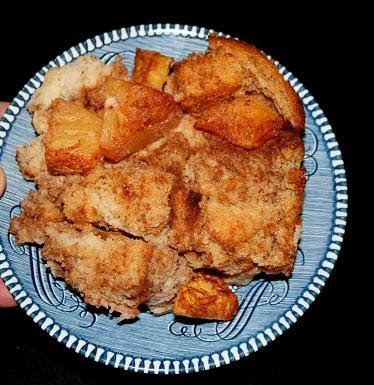 Dave loves homey-type, old-fashioned desserts. Bread pudding, custard, and rice pudding are some of his favorites. Our wedding anniversary was this week and so I made him some special treats since he is such a dessert lover. I made pretty much basic bread pudding but with the addition of roasted fresh pineapple. I peeled and cored a small pineapple and cut it into 1/2 inch chunks. I put the fruit into a roasting pan with about 1/3 cup of apple juice, a big sprinkle of cinnamon, a little nutmeg, and about 1/4 cup of sugar. I mixed everything and baked the pinepple in a 350F oven for about 20 minutes, just until the pineapple started to brown.

Mix the milk, eggs, sugar, vanilla, and cinnamon together until very well blended. Put the bread chunks in a large baking pan, at least 13x9. Add the pineapple and raisens to the bread, making sure they are evenly distributed. Pour the milk mixture over the bread and push down the pieces of bread so that they absorb the liquid. Bake at 325F for about 50-60 minutes, until a toothpick inserted into the center comes out clean. Dust with powdered sugar to serve, or serve with ice cream.