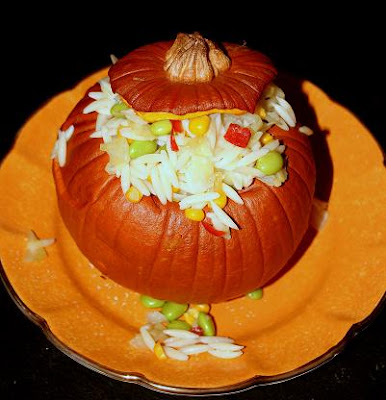 One of the neat things about Fall is all the cool weather produce in the stores. I always get excited when I see those little pumpkins in the produce aisle. Not the Halloween ones, but the ones for baking and eating. I usually use them for pies and desserts, but I thought that I would try making a savory stuffed pumpkin. Originally, I was going to make some kind of a rice stuffing but I found that I was out of rice. I did have some orzo, so I decided to use that along with some veggies. If you're not familiar with orzo, it is a rice shaped pasta. You should be able to find it in most grocery stores. You could always substitute rice if you are unable to find orzo.

I cut off the top of the pumpkin and cleaned out the seeds and fibers. I seasoned the inside with a little salt and pepper. I put the pumpkin in a baking dish, on top of a couple layers of tinfoil so that the bottom didn't burn. I added enough tap water so that the water came up the pumpkin sides about an inch. I baked the pumpkin in a 350F oven until it was just tender, this was a very small pumpkin so it only took about 40 minutes.

While the pumpkin was cooking, I made the orzo according to package directions. Basically, you just boil and drain, like regular pasta. To the cooled orzo, I added some defrosted edamame, some defrosted corn, some diced roasted bell peppers (store bought), and some sauteed cabbage. The cabbage was leftover from a previous meal. To make sauteed cabbage: Slice cabbage into thin strips. Season with salt and pepper and saute in a little olive oil until the cabbage wilts and starts to brown. I seasoned the orzo mixture with some tamari, and a few drops of sesame oil.

I filled the pumpkin with the orzo and then heated it in the oven for about 20 minutes, until the filling was nice and hot. To serve: Slice the pumpkin into wedges and as you eat the filling you can also eat the pumpkin flesh.
Posted by Michele