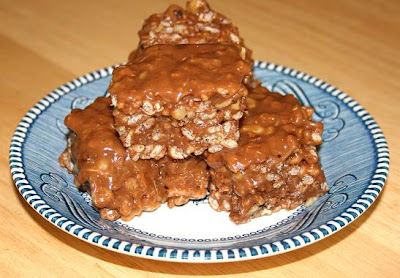 My step-mother sent me this recipe along with a bunch of other candy recipes. The original recipe is at northpole.com.

Combine the candy bars and butter in a large microwave-safe bowl. (I don't have a microwave so I did this in a saucepan over very low heat.) Microwave until melted, about 5 minutes. Mix well. Stir in the cereal and pecans. Press the mixture into a small 9 x 13 pan. (I sprayed PAM in my pan first.) Microwave the chocolate bark in a small microwave-safe bowl until just melted. Pour chocolate over the cereal mixture. Chill until firm and then cut into bars.
Posted by Michele