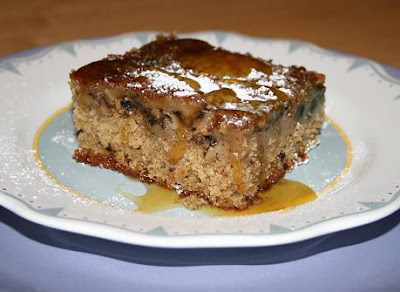 Wow! This cake is amazing. It's really moist but not too sweet. It's also very simple to make which is a big plus. I followed the recipe pretty much but I did add extra figs, and to compensate, an extra egg. Instead of the icing, I topped the cake with powdered sugar and chestnut honey. The chestnut honey compliments this cake perfectly. It's hard to describe the taste of the honey, I mean it tastes like honey, of course, but there is a little touch of a bitter component as well. It has a very interesting and delicious flavor. I plan on making this cake again but since fresh figs have such a short season I may try to make it with dried figs. It would be lovely for a group because it makes many servings.
2 cups all purpose flour
1 teaspoon cinnamon
1 teaspoon ground cloves
1 teaspoon ground nutmeg
1 teaspoon baking soda
1 teaspoon baking powder
1/2 teaspoon salt
1 1/2 cups white sugar
1 cup butter
3 eggs, beaten
1 cup buttermilk
1 cup chopped fresh figs
1 cup chopped pecans
1/2 cup butter
1/2 cup white sugar
1/2 cup evaporated milk
1/2 teaspoon baking soda
Preheat oven to 300F. Grease a 9x13 inch pan. Mix together the flour, cinnamon, cloves, nutmeg, 1 teaspoon baking soda, baking powder and salt. Set aside.
In a large bowl, cream together 1 cup butter and 1 1/2 cup sugar until light and fluffy. Stir in the eggs. Beat in the flour mixture alternately with the buttermilk, mixing just until incorporated. Fold in the chopped figs and nuts.
Pour batter into prepared pan. Bake in the preheated oven for 60 minutes, or until a toothpick inserted into the center of the cake comes out clean. Allow to cool.
To make the icing: in a large saucepan, mix together butter, sugar, evaporated milk and baking soda. Bring to a boil, stirring until sugar is dissolved. Then cook without stirring until the mixture turns brown, or until it reaches 234F. Cool to lukewarm (110F). Pour into a small bowl until and beat until it thickens to spreading consistency. Quickly spread the icing onto the cooled cake.
**This recipe is from allrecipes.com.
Posted by Michele