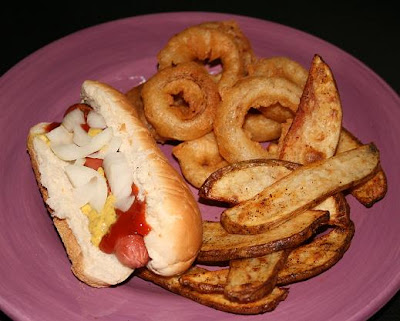 When my husband and I were dating I was a vegetarian and he was not. In fact, I think I was the only vegetarian he'd ever met. He pretty much existed on take-out burgers, gyros, hot dogs, and such. Within a year of our marriage he became a vegetarian, all on his own, with no prodding from me. Truly! I was so proud of him. Even when he was in the military and his food choices were VERY limited, he stuck to vegetarianism. He pretty much ate only french fries, peanut butter, and mashed potatoes. I know he still craves fast-foody type take-out, so once in awhile I whip up a truly fast-foody home cooked vegetarian/vegan meal, and it never fails to put a smile on his face.

Fries:
Preheat your oven to 425F.
Cut a potato in half lengthwise and then slice each half into 1/4 inch strips, also lengthwise. Soak the potato slices in hot tap water for 20 minutes; this gets rid of some of the starch. Drain, and rinse the potato slices and then dry them on paper towels. Drizzle the potato slices with a small amount of olive oil, just so they are lightly coated. Sprinkle them with salt, pepper, and chili powder, all to taste. Line a baking sheet with foil and arrange the potato slices on a single layer. Bake for about 25 minutes, or until they are golden brown. You may need to turn them once midway during cooking so that they brown evenly.

Onion rings:
Slice 3 or 4 large onions into 1/3" slices. Separate into rings. Mix 1 can of beer, 3/4 teaspoon salt, a big sprinkle of chili powder, and 1 cup of flour in a bowl. Let sit for 15 minutes. If the batter looks too thin, it should resemble pancake batter, add a bit more flour. Sprinkle some additional flour on a plate. Fill a medium saucepan halfway full with cooking oil and heat to a temperature of 375F. Dip each onion ring in flour and shake off excess. Dip the individual rings into the batter just as your getting ready to fry them, and only do a few at a time so your oil does not get too cool. Fry each onion ring until it is golden brown. BE VERY CAREFUL WITH THE HOT OIL AS IT CAN SPATTER! Drain on paper towels and season with a bit of salt.

As an aside: About 10 years ago I used to babysit for a little boy who was about two years old. Though his parents weren't vegetarians, they used to feed their son Garden Burgers on a regular basis. He loved them! I think it is a wonderful idea to sometimes feed your kids vegetarian versions of their favorite foods starting when they are very young. It teaches them to be open minded about food and about people's choices in general, plus, it is usually healthier for them and saves on having them consume animal fat. There are so many animal-free products now to tempt kids.
Posted by Michele