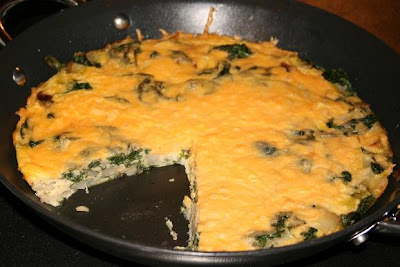 A frittata is a baked omelette and you can use just about any leftover veggies to make one. For this frittata, I diced up one onion and sauteed it in a bit of oil until it was soft. I added three diced leftover baked potatoes and cooked those until they were lightly browned. I added in half a bag of baby spinach. Once the spinach was wilted I poured in eight beaten eggs. I cooked the frittata on medium-low just until the bottom was set. I topped the eggs with a handful of grated sharp cheddar and placed the saute pan in a 350F oven until the frittata was totally set and the cheese melted. I think it took about 15-20 minutes. Make sure that you use a saute pan that is oven-safe. Once the frittata was cooked I let it cool enough so that I could cut it like a pizza. This is really good for feeding a bunch of people or for a brunch.