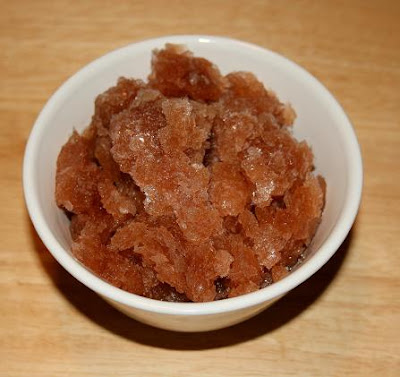 I had a huge bag of lemons I needed to use up so I made this granita. I had originally planned on making a very complicated lemon cake, but I ran out of energy. To make this I juiced all the lemons, added some freshly brewed red tea, and some sugar. The quantities are all to taste. Basically, it's just lemonade with red tea added. As an afterthought, I added some vodka, to cut the sweetness. I poured the lemon-tea mixture into a shallow baking dish and put it in the freezer. After about an hour, I stirred the mixture to break up some of the ice crystals. I did that a couple more times until it ended up being quite like a slushy. A slushy with a vodka kick! Very yummy.