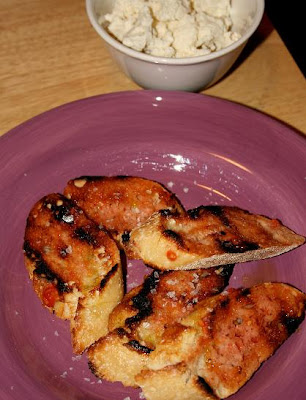 I first had a version of this in Italy and it is one of my favorite foods ever. It's great to make when you have a bunch of extra tomatoes on hand. I like the bread plain but Dave likes goat cheese on the side for spreading.

Thick slices of french bread or other crusty bread
Ripe tomatoes, cut in half (squeeze out some of the seeds and juice)
Good olive oil
Sea salt

Grill the bread on a BBQ or indoors on a grill pan until it is charred. While the bread is still hot, rub each slice with the cut side of a tomato. Sprinkle a little sea salt on each slice of bread and drizzle with olive oil.

Note: A really sweet woman who read this post sent me an e-mail saying that this is a common dish in Spain to eat for breakfast. She also suggested rubbing garlic cloves on the bread before rubbing the tomato. Thanks Lia (http://farosur.blogspot.com)!!
Posted by Michele