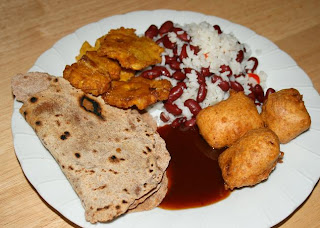 Saturday night is our night to try new foods and restaurants. We are on an ongoing quest to try all the highly rated pizza places in the Bay Area. I didn't feel like pizza this Saturday but I also couldn't come up with any restaurants I was in the mood for. Dave leaves all the food decisions to me as he will eat just about anything I put in front of him. After perusing the contents of our fridge, this the most ethnically diverse menu I could come up with. Paneer pakora and roti from India, sweet-sour sauce which I believe is Asian, fried plantains are a nod to Central and South America/the Caribbean/Africa, and red beans and rice is a Southern dish - though my version is very simplified. This ended up being a really good dinner though a bit on the heavy side. Without the paneer it is vegan. I think my favorite part was the plantains - I'd never made them before and they were really good. Dave also had a piece of the toffee apple pie for dessert which is a British recipe. Last night we truly traveled the world on our plates.

The paneer pakora recipe and the sauce recipe are a couple posts down.

For the rice: I cooked regular rice according to the package directions but along with the rice I added a bunch of finely diced fresh chiles. Onion would also be good. As soon as the rice was done I added some rinsed and drained canned kidney beans, salt, pepper, and hot sauce.

In a bowl, mix the flour salt and water. Add more water if the dough is too hard. Knead the dough well to make a medium soft dough that is not sticky. Cover the dough with a damp towel and set aside for 10 minutes.

Divide the dough into 8 portions. Roll each portion into a ball and press it flat. Using extra flour as needed, roll each piece of dough into a 6 inch circle. Heat a heavy skillet on medium heat. Put the rolled roti on the skillet. It will puff up and start to darken. Cook, flipping a couple times, until each side is lightly browned. This only takes a moment. Wrap the cooked roti in foil to keep them moist. Some people butter the roti when they are still hot but I like them plain.

Heat the oil to 375F. While the oil is heating peel the plantains and cut them into 3/4 inch slices. Fry the slices in hot oil for 3 minutes. They should be a light golden color. Remove the plantains from the oil with a slotted spoon and drain on a paper towel. When the plantain slices are cool enough to handle, smash them into flat rounds (I used the back of a big spoon). Fry the flattened plantain rounds in the hot oil for another 3 minutes. They will turn golden brown and become crisp. Keep a close eye on them as they can burn quickly. Remove from the oil and drain on paper towels. Salt to taste.
Posted by Michele