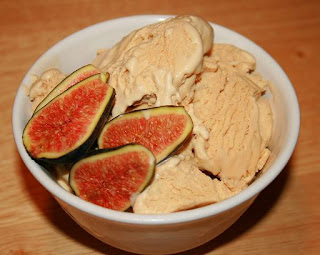 I had one can of homemade dulce de leche in the fridge and I wanted to use it up before it spoiled. I decided to make ice cream and so after scrounging around I found a can of coconut cream, some regular cream, and a can of evaporated milk. Cream of coconut is not coconut milk, it is a thick sweetened product made from coconut meat. It is usually in the liquor department of grocery stores as it is used in many tropical drinks.

To make this ice cream I used 1 can of coconut cream (19 ounces), 1 cup of heavy cream, 1 can of dulce de leche (14 ounces), and 1 can of evaporated milk (12 ounces). I heated everything in a heavy saucepan until almost simmering, I needed to get the caramel to mix in the with liquids. I let the mixture cool and then just processed it in my ice cream maker. It turned out really good, and it's not overly sweet. I think some shredded coconut would have made a nice addition as would some pecans or walnuts. I served the ice cream with fresh figs.

The recipe for the dulce de leche is included in my post for toffee apple tart, dated August 9th.